The British Pound remains bid against a range of currencies in early trade as the UK readies itself for a December 12 General Election. The bill needs to pass through the House of Lords later today, which it is fully expected to, before Parliament dissolves next Wednesday ahead of five weeks of rumors, polls and campaigning. Last minute amendments to the bill to allow EU citizens and to lower the voting age to 16 were defeated.

According to bookmakers William Hill, the Conservative Party are 5/6 (odd on) to win a majority at the GE. Worryingly, no overall majority is priced just slightly wider at 6/5, while a Labour majority is 16/1 and a Liberal Democrat majority is 40/1. If Boris Johnson wins the election without a majority, the UK Parliament will remain paralyzed.

Ahead on the economic calendar, a raft of medium and high importance data releases and events. In Europe there is German unemployment, inflation readings and Eurozone confidence indicators, in Canada the latest Bank of Canada rate decision while in the US there is the final look at Q3 US GDP and the FOMC rate decision.

GBPUSD remains at or just below 1.2900 in quiet trade as traders focus on events in the US today. Brexit will take a back seat for the rest of week as US data takes control of the pair’s direction. GBPUSD will need a bout of positive news if it is to break above the October 21 high at 1.3013, while recent support from the 1.2780 area should remain in place. 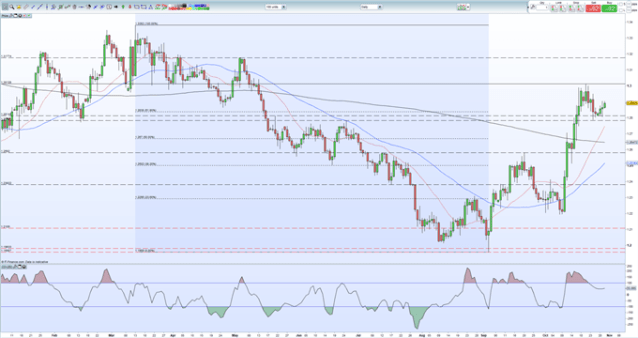 IG Client Sentiment shows that how traders are positioned in a wide range of assets and markets.

Traders may be interested in two of our trading guides – Traits of Successful Traders and Top Trading Lessons – while technical analysts are likely to be interested in our latest Elliott Wave Guide.

What is your view on Sterling (GBP) – bullish or bearish?? You can let us know via the form at the end of this piece or you can contact the author at [email protected]or via Twitter @nickcawley1.